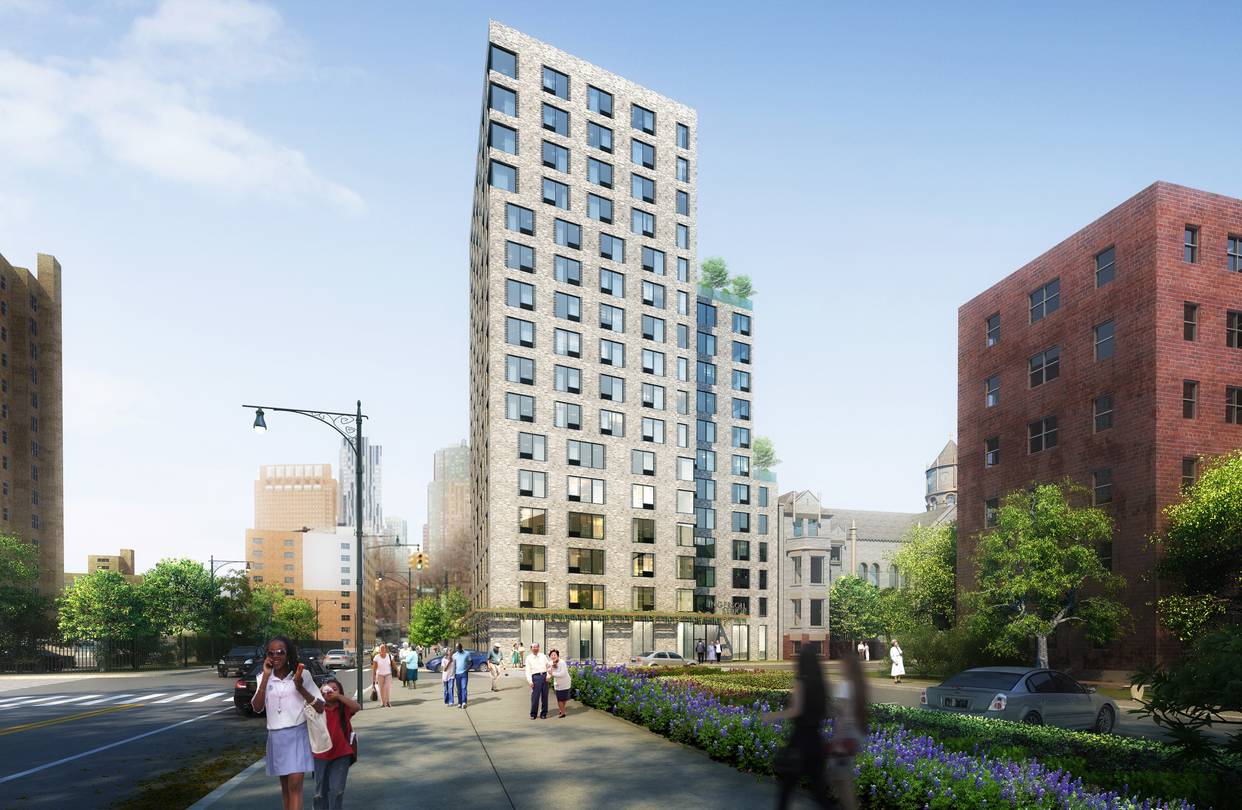 A rendering of the Ingersoll Senior Residences, which is planned to house 145 affordable units for seniors in Brooklyn but is facing a funding gap due to the decline in the value of certain tax credits. Photo: Marvel Architects
By Laura Kusisto | Laura Kusisto
The Wall Street Journal

The possibility of a tax-code overhaul is casting a shadow over the $10 billion affordable-housing industry, which receives tax credits so valuable they often determine whether or not projects get off the ground.

Members of Congress and President Donald Trump have proposed reducing the corporate tax rate to 15% to 20% from the current 35%, dimming the allure of a credit investors such as big banks and insurance companies receive to offset income taxes. Affordable housing, which represents about one-quarter of all new apartment construction in the U.S., relies on the credit for capital.

Developers said investors are valuing the credit 10% to 20% lower since Election Day. In some cases, investors have walked away, opening up funding gaps in projects already in motion. Because developers already walk a financial tightrope to build low-income housing, some projects are simply failing.

Tax-credit values “have collapsed,” said Stuart Boesky, chief executive of Pembrook Capital Management LLC, a lender specializing in affordable housing. “Some of the deals are just dying…Some of the deals are scrambling around looking for gap grants from state and local housing agencies.”

The reduction in the credit’s value already is likely to lead to $1 billion to $1.5 billion less equity investment in affordable housing this year, according to Novogradac & Company LLP, an accounting firm.

The tax-credit program was signed into law by President Ronald Reagan in 1986, during the last major tax-code overhaul, to encourage more private investment in affordable housing and to move away from the traditional public-housing model.

The program requires that developers set aside a certain portion of units for families making below the local-area median income and restricts the rents that they pay. In reality, most projects end up being almost entirely leased by low-income families.

The value of the tax credit is two-pronged. The housing-credit program allows investors to take tax credits dollar for dollar against their federal taxes in exchange for providing funds to build affordable housing.

The program offers additional value to investors because they can deduct the depreciation of the property and interest expenses. These deductions are most affected by the proposed changes. So, for example, if the program allows a firm to deduct $1 million from its income, the deduction in the tax bill at a rate of 20% is less than if that same income had been taxed at 35%, said Scott Hoekman, a senior vice president at Enterprise Community Investment Inc.

Investors are pulling back even though the timing of any tax overhaul is uncertain.

Wells Fargo & Co., one of the country’s largest investors in low-income housing, purchased $2.23 billion of credits in 2016. Bank executives expect that number to fall this year.

“There was a fair amount of surprise immediately [after the election] and different people reacted differently,” said Michael Lavine, head of low-income housing tax-credit investments at the bank.

Mr. Lavine said some investors are staying on the sidelines. Wells Fargo is assuming a lower corporate-income tax rate, he said. Some states have been able to fill in the gap with additional subsidies, but others haven’t.

“There’s some risk that a large number of projects will fall by the wayside,” he said.

The potential pullback in affordable-housing construction comes at a time when renters are being squeezed. Average rents in the U.S. have jumped by 26% since 2010, far outstripping income growth, which has been relatively flat.

Affordable-housing development is a significant economic driver. About 100,000 of the roughly 400,000 apartment units built each year receive the tax credit, according to the National Multifamily Housing Council.

That could decline, however, if the credit continues to lose value.

A project in Worcester, Mass., to renovate 132 units that were built in the 1970s is now facing a $3 million gap. The developer, The Community Builders, had planned to update kitchens and bathrooms, upgrade the heating system to help bring down tenants’ electric bills and install new windows.

“What we’re grappling with now is in large part the uncertainty,” said Eliza Datta, regional vice president of development in New England at The Community Builders. “I think deals will close. They’re just going to take longer and they’re going to cost more.”

Officials in Pittsburgh, meanwhile, said the change in tax-credit pricing is threatening to derail the first major push in the city’s history to create affordable housing.

In a leafy Oakland neighborhood filled with hospitals and universities, a local development corporation planned to renovate 24 apartment units and construct 25 affordable-housing units. The shrinking value of the tax credit has left the project with a $450,000 gap.

The change in tax-credit value, along with possible cuts to federal housing spending, would be a blow, said Kevin Acklin, the chief of staff to Pittsburgh Mayor William Peduto. “We don’t want to become like cities like Boston or San Francisco that are unaffordable for people to live.”

The tax credit has bipartisan support in Congress and is likely to survive a push to eliminate most deductions. Sen. Maria Cantwell, a Democrat from Washington, is proposing legislation that would expand the credit by 50%, helping to offset the loss in value. The bill is co-sponsored by Sen. Orrin Hatch, a Republican from Utah.

“Ways and Means Republicans believe the low-income housing tax credit is important and they are working through how this credit will fit in our next system,” said Emily Schillinger, communications director for the House Ways and Means Committee.