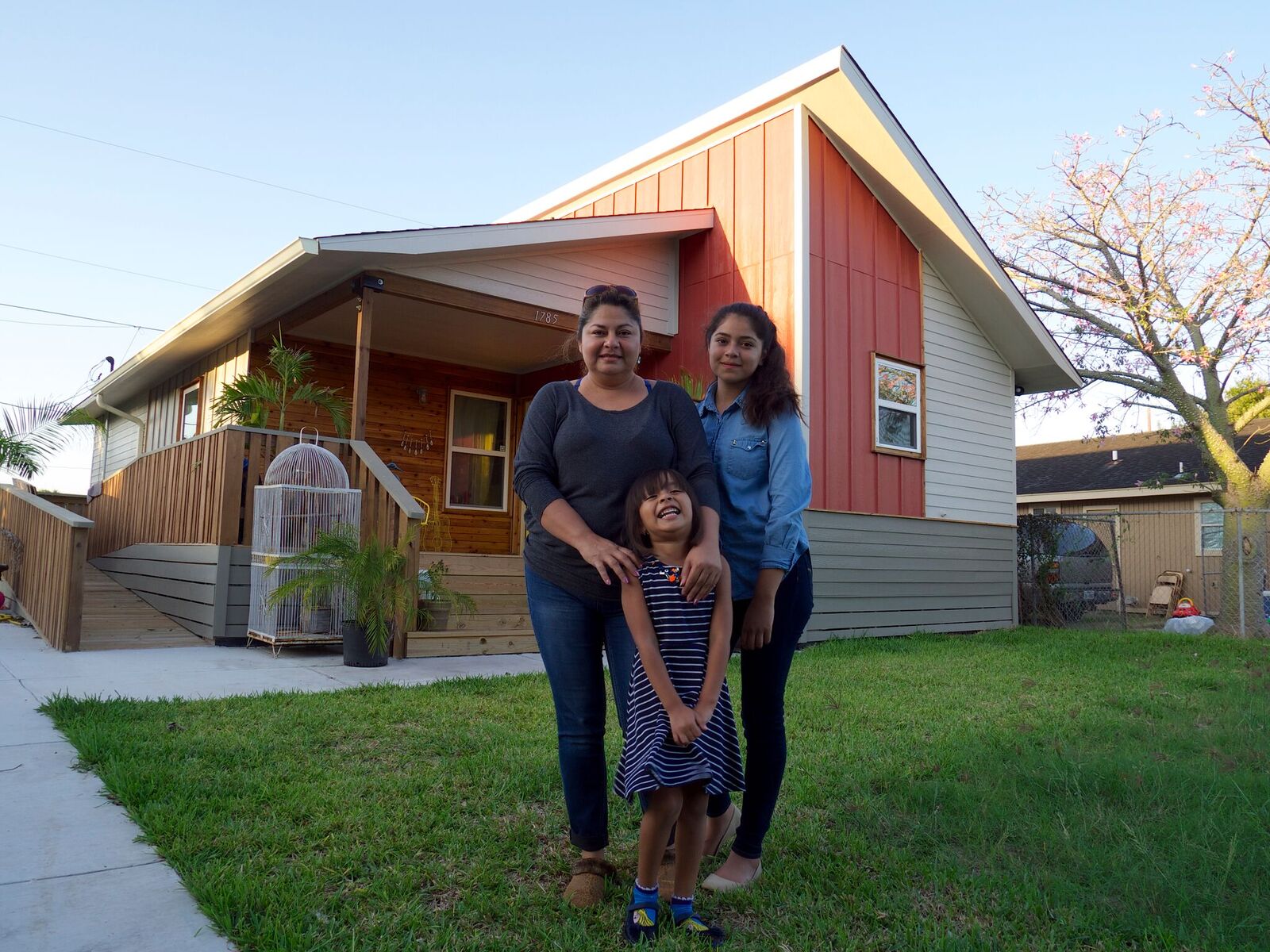 Housing For When Disaster Strikes

Texas is prone to some of Mother Nature’s fiercest elements from tornadoes and wildfires to hurricanes and flooding. When these disasters strike and people lose their homes they need safe shelter immediately. What communities provide as temporary housing often depends on resources available from the government.

In response to Hurricanes Rita and Ike, local officials largely relied on trailers provided by the Federal Emergency Management Agency (FEMA) for temporary housing. This solution had some downsides.

A 2008 Los Angeles Times article highlighted some of the problems with using FEMA trailers. According to local officials, it took too long for them to arrive, and there weren’t enough. FEMA officials countered that they had plenty of trailers but nowhere to put them because of local zoning and floodplain regulations.

But there could be housing relief for future disasters thanks to an innovative concept originated by John Henneberger of Texas Low Income Housing Information Service and created and implemented by Community Development Corporation of Brownsville (CDC Brownsville), buildingcommunityWORKSHOP, the Hazard Reduction and Recovery Center at Texas A&M University, La Unión del Pueblo Entero, and A Resource in Serving Equality.

That group designed what’s called the “RAPIDO” home (pictured to the right). It starts with a core housing unit that includes a kitchen, bathroom, living and sleeping area that can be built in just six days. That core unit can be expanded into a fully functioning home within six weeks.

This solution addresses the two headaches with FEMA trailers. RAPIDO homes can be built quickly, and since they can become permanent homes, they can comply with local regulations and blend into a community.

The RAPIDO concept is generating attention outside of Texas. It was recently on display at the Cooper Hewitt, Smithsonian Design Museum in New York City. According to a recent Houston Chronicle article, Louisiana officials have also reached out to RAPIDO creators to see how the product could help that state rebuild in the wake of catastrophic flooding.

That article also highlights FEMA’s interest by quoting an email from the agency to Mr. Henneberger that read, “We will be continuing to look for opportunities to advance the RAPIDO model discussion here and to push for needed policy changes which you so eloquently highlighted.” That’s an indication the Texas-born innovation could eventually be part of the federal government’s response to future disasters.

In December 2016, the TSAHC Board of Directors approved a $1,000,000 commitment from TSAHC’s Texas Housing Impact Fund to support CDC Brownsville’s Mi Casita program, which uses the RAPIDO model to build affordable permanent homes quickly outside of disaster areas. TSAHC’s funding will result in the creation of 30 affordable homes in Cameron, Hidalgo and Willacy Counties.

The Other Housing Crisis:

For Debbie Green, purchasing a home was a dream come true. The 56-year-old resident of rural Elkins, West Virginia, suffers from five types of debilitating epileptic seizures, and had been renting a friend’s mobile home at a discounted rate. Unable to work, she got by on monthly disability payments of about $900, but was still struggling to pay her utility bills. Sometimes, at the end of the month, she had only $4 in the bank and wondered if she would need to cut off the electricity or water.

About 21 percent of the US population lives in rural areas, according to the Housing Assistance Council. Nearly 30 percent of them reside in substandard housing with leaky roofs or inadequate plumbing.

Green’s neurologist urged her to move into a larger home with a second room where a caretaker could stay — a seemingly impossible doctor’s order.

“The biggest part was completely not knowing anything about where would you go, what would you do, who would you talk to,” she recounted. At a loss, she contacted the nearby Randolph Housing Authority to figure out how she could afford to purchase her own home without any savings.

Within months, Green had moved into a beautiful single-story house built by a local youth organization. Her monthly mortgage payments were about what she had paid for her friend’s mobile home, and, with lower utility bills, she was finally putting money in the bank. This extraordinary turn of luck was made possible by federal funding and the Randolph Housing Authority, one of many organizations that are cropping up to fill the need for quality housing in depressed rural communities.

Elkins is one of many rural towns throughout the nation suffering from a housing shortage that remains largely invisible to the rest of the country. Although the population of about 7,000 has stabilized in recent years, it has declined over the past two decades, and the local economy is still recovering from the 2008 financial crisis. The homes available here are often old and rundown; there is little money to attract developers and few banks to lend mortgages. As a result, affordable, quality housing in Elkins is hard to come by.

The people most affected by the lack of good-quality housing are low-income residents who can’t afford mortgages with high interest rates. And those who do own houses often make such low wages that they’re unable to secure loans to repair their deteriorating homes.

About 21 percent of the US population lives in rural areas, according to the Housing Assistance Council. Nearly 30 percent of them reside in substandard housing with leaky roofs or inadequate plumbing. Rural families are more likely to be impoverished than the rest of the nation, and about half of them spend 50 percent of their monthly income on rent.

Homeownership is a crucial step to building wealth, but national banks that offer home loans to homebuyers are few and far between in rural areas. They have little incentive to serve low-income, low-density populations.

“Your choice is limited. You can imagine — there aren’t that many people in rural areas, and there certainly aren’t enough banks,” said David Dangler, director of the Rural Initiative at the affordable-housing advocacy group NeighborWorks America.

The dearth in affordable rural housing often corresponds with regional economic factors, Dangler said. In Elkins, for example, the disappearing coal industry has led to declining population and economic activity. In rural areas that serve as destination hubs for outdoor activities like hiking or skiing, the demand on housing has caused property values to skyrocket.

To complicate matters, between 2003 and 2014 the federal government slashed support to one of its rural low-income home loan programs by 88 percent. This program, the US Department of Agriculture’s Section 502 Direct Loan, subsidized housing for more than 2.1 million low-income rural families, offering interest rates as low as 1 percent.

When Green went to the Randolph Housing Authority in 2010 to ask about buying her first home, she wasn’t optimistic. There’s no way I could get a home, she thought. But through the help of federal funding and donated labor, she soon learned that she could.

Executive Director Karen Jacobson helped Green explore her options and the home loan process. The USDA rural development division financed her mortgage, and her one-story home was built by teenagers through YouthBuild, a national nonprofit organization in which low-income youth learn construction skills by building affordable housing for homeless and other low-income people.

After six months of construction, Green moved into her dream home, replete with a front porch, two bedrooms, a spacious living room and kitchen. Now she even has money at the end of the month to get a haircut — previously a luxury — or to make an extra payment on the mortgage, which carries an interest rate of only 3 percent.

“It is just nicer than I would have ever expected,” Green said with a hint of pride.

The Randolph Housing Authority has built about 300 single-family and multifamily housing units in the past 20 years. Jacobson said that working with one nonprofit to build housing and access subsidies and another to educate homebuyers has allowed them to address the area’s housing shortage. They have plans to develop a health and wellness program to provide the area’s aging population with in-home care, enabling them to live independently.

Across the country in northern California, another affordable-housing development and advocacy group is pioneering energy efficiency for low-income rural residents.

Debbie Green (right), standing in front of her house built by YouthBuild in Elkins, West Virginia. Photo courtesy of YouthBuild.

Spring Lake, a Mutual Housing California development in the town of Woodland, is the nation’s first net-zero energy certified multifamily rental housing. It’s also the only permanent year-round housing for agricultural workers in the country. Residents Jose Jimenez and Maria Virginia Gutierrez Jimenez are retired agricultural workers from Mexico who were having trouble finding an affordable apartment.

For nearly 20 years, the couple had lived with five other family members in a two-bedroom apartment in northern California. But as the kids in the apartment became adults, Jose and Maria finally reached their breaking points.

“The house was getting tight to live in and we needed to find a place,” Maria said through a translator.

They heard about Spring Lake during an informational meeting and moved into their own apartment there about a year ago. Now they live among other agricultural workers who speak Spanish, and they can join recreational programs for seniors. There are also after-school programs, computer lending, even a bike share program and summer lunches.

“We have everything really well here,” Jose said through a translator. The couple pay $300 for their apartment. The building’s airtight construction, solar panels, and energy monitor help keep their utilities bill down to $10.

Mutual Housing’s 19 developments serve over 3,000 residents on a $10.74 million annual budget, which comes from federal grants, state and federal tax credits, and rental payments from residents.

Rural dwellers in California face a unique set of obstacles in accessing affordable housing, because in 2013 the California Legislature dissolved a redevelopment law that had provided aid. Now these residents must rely on the state’s cap-and-trade program to generate affordable-housing money for areas that reduce greenhouse gas emissions by increasing access to public transportation.

“The problem is that most small towns in rural areas don’t have public transit,” said Rachel Iskow, the executive director of Mutual Housing California. “Many don’t even have buses. They certainly don’t have high-speed transit, so they can’t access those funds.” Woodland, a mixed-income agricultural town, is one such area that Iskow said may not qualify for support.

Throughout the nation, the need for affordable housing is at an all-time high.

Throughout the nation, the need for affordable housing is at an all-time high, according to the Harvard University Joint Center for Housing Studies 2016 report. The annual housing trends report shows that 11.4 million households pay over half of their income on rent, and prices are rising more than twice as fast as incomes. Without significant policy changes, the affordable-housing shortage is only expected to grow. Cost burdens are especially severe in rural areas as youth migrate to urban centers and those who remain can’t shoulder the costs of essential services like housing or grocery stores.

Whereas the Appalachian town of Elkins has struggled to woo new developers in the aftermath of the coal industry, California’s ever-rising cost of living is outpacing the wages of many low-income potential homebuyers. An increase in low-income seniors and low-wage jobs will only create a greater demand for housing development subsidies, Iskow warned.

At least in Spring Lake, the Jimenezes say that they’ve finally found a strong community that helps them feel at home. “We don’t know what’s going to happen in the future, but right now we’re really happy,” Jose said.